The Dutch National Strip Ticket (Nationale Strippenkaart) is used as payment for tram and bus transportation in the Netherlands. Per 2008 this ticket has been provided with a new hologram. The hologram contains moiré-generating areas that provide an interesting example of one-dimensional moiré magnification. In this downloadable slide presentation (4.8 Mb) I discuss the optical properties of such moiré-generating features.
A discussion on two-dimensional moiré magnification is given in the item "Motion Security Feature" below.

The Motion feature first appeared in March 2006 on the 1000 Swedish crown note. The feature displays the face value 1000 and crown icons about 2mm high. Remarkably, on tilting the feature about a horizontal axis, the images also move horizontally, while moving vertically on tilting it about a vertical axis. This counterintuitive optical phenomenon is based on moiré magnification.
This intriguing feature will soon appear on the new US$ 100 note and on high denomination Mexican and South Korea notes and it will undoubtedly capture other currencies.
This presentation (4 Mb) has been expanded per February 2008. 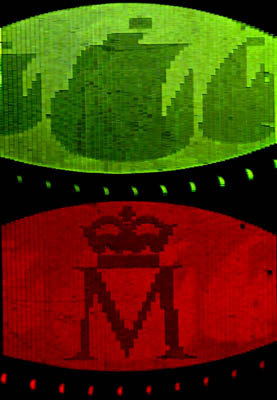 An engraved double image on coins ©

I received a coin, issued in 2006 by the Royal Spanish Mint, commemorating the 500th anniversary of Christopher Columbus (1451 - 1506). The coin contains an engraved security feature reminescent of a latent image, showing (1) Columbus' ships when illuminated from one side and (2) the emblem of the Royal Spanish Mint, when illuminated from the other side.
In the downloadable slide series (3.11 Mb) I show the optical effects and illustrate how the feature works.

by A.V. Goncharsky and A.A. Goncharsky, Moscow University Press (2004), ISBN 5-211-04903-9, (CD-ROM included).
This technical reference book is a one of a kind on e-beam origination of diffractive optically variable image devices (DOVIDs). Apart from clearly dealing with the theoretical aspects, it contains an appendix with an invaluable series of holographic samples with overt features and covert features: true color images, still covert laser read (CLR) images, (kinoform type; see illustration on the left), animated kinoforms, concealed images, high resolution line patterns, and so on. If you are in holography and/or in document security, you want to own this book.
The Lotus-JinYang kinoform animation that I captured from one of the holograms in the appendix of this book, using a He-Ne laser beam, is downloadable.

The crime of counterfeiting in English law was first made a statutory offence in 1562, and was punishable by fine, by standing in the pillory, having both ears cut off, the nostrils slit up and seared, the forfeiture of land and perpetual imprisonment and it was made a capital crime, without benefit of clergy in 1634.
I have a few antique banknotes in my collection that have an ominous message printed.
A brief slide presentation (updated per November 2007) is downloadable (1.9 Mb).

This 15 x 15 cm piece of art is a silkscreen print of Athene noctua -literally "night owl"-, also called Little Owl, that adorns a wall in my office. It was a gift from my daughters Esther and Mirjam.
The logo of VanRenesse Consulting is an image of Athene noctua, derived of the watermark in the 1992 series of the Dutch 100 guilder note, as is illustrated by the download. The Little owl was sacred to the goddess Athena, from whom it gets the generic name. 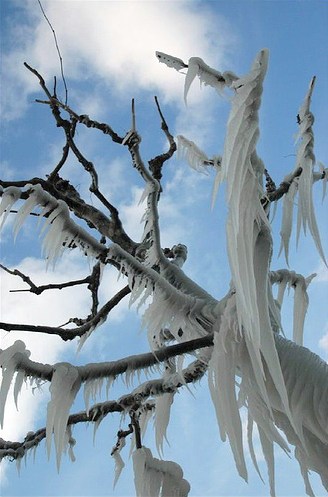 After the concurrence of intense cold (-8°C to -12°C) and a storm blowing with velocities over 100 km per hour in January 2005, the waves of Lake Geneva (Switzerland) became so fierce that they sprayed over everything in their neighbourhood. And the droplets instantly froze and accumulated on everything they touched, creating dagger shaped icicles and fairylike feathery structures. But boats toppled over or sank under the loads of ice and auto-mobiles temporarily became auto-immobiles.
And if you really like icy stuff, you should visit this site of professor Kenneth G. Libbrecht of Caltech (California Institute of Technology) on snow crystals and other ice phenomena.