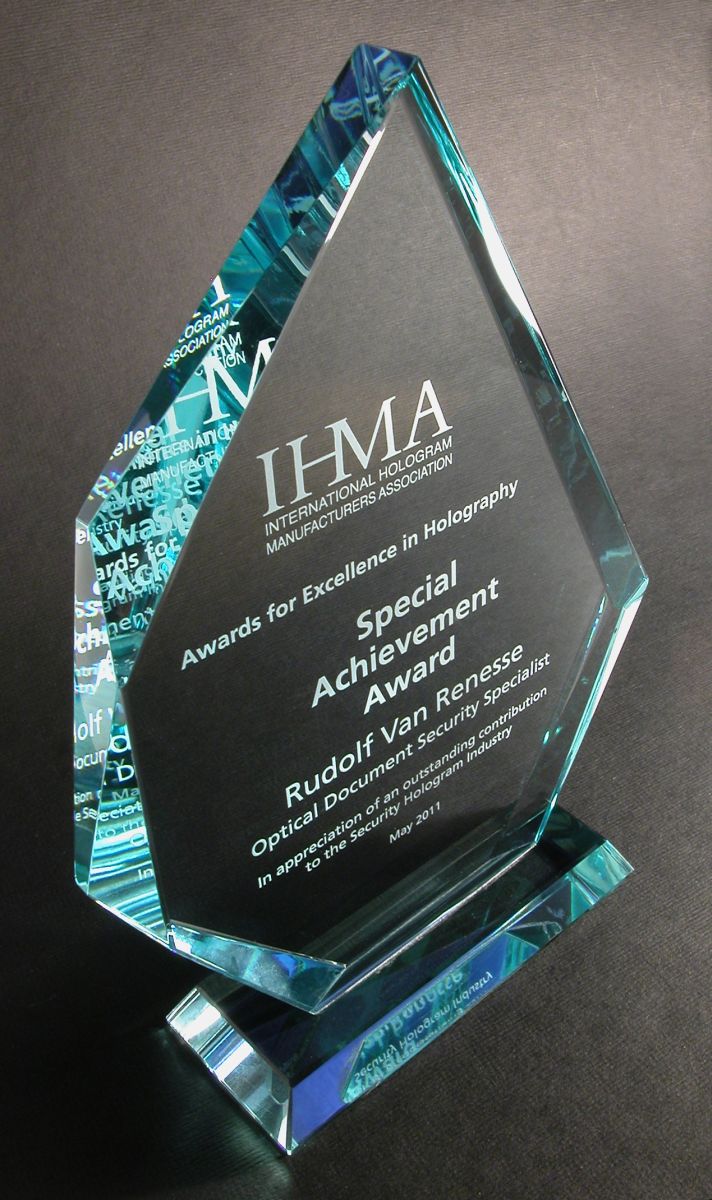 May 2011
With great pride we announce the receipt of the IHMA Special Achievement Award for Excellence in Holography by Ruud van Renesse. He received this award in appreciation of his outstanding contribution to the Security Hologram Industry.

The 2012 Conference on Optical Security and Counterfeit Deterrence

The 2010 Conference on Optical Security and Counterfeit Deterrence

Conference Proceedings on CD-ROM are available, as well as individual papers. 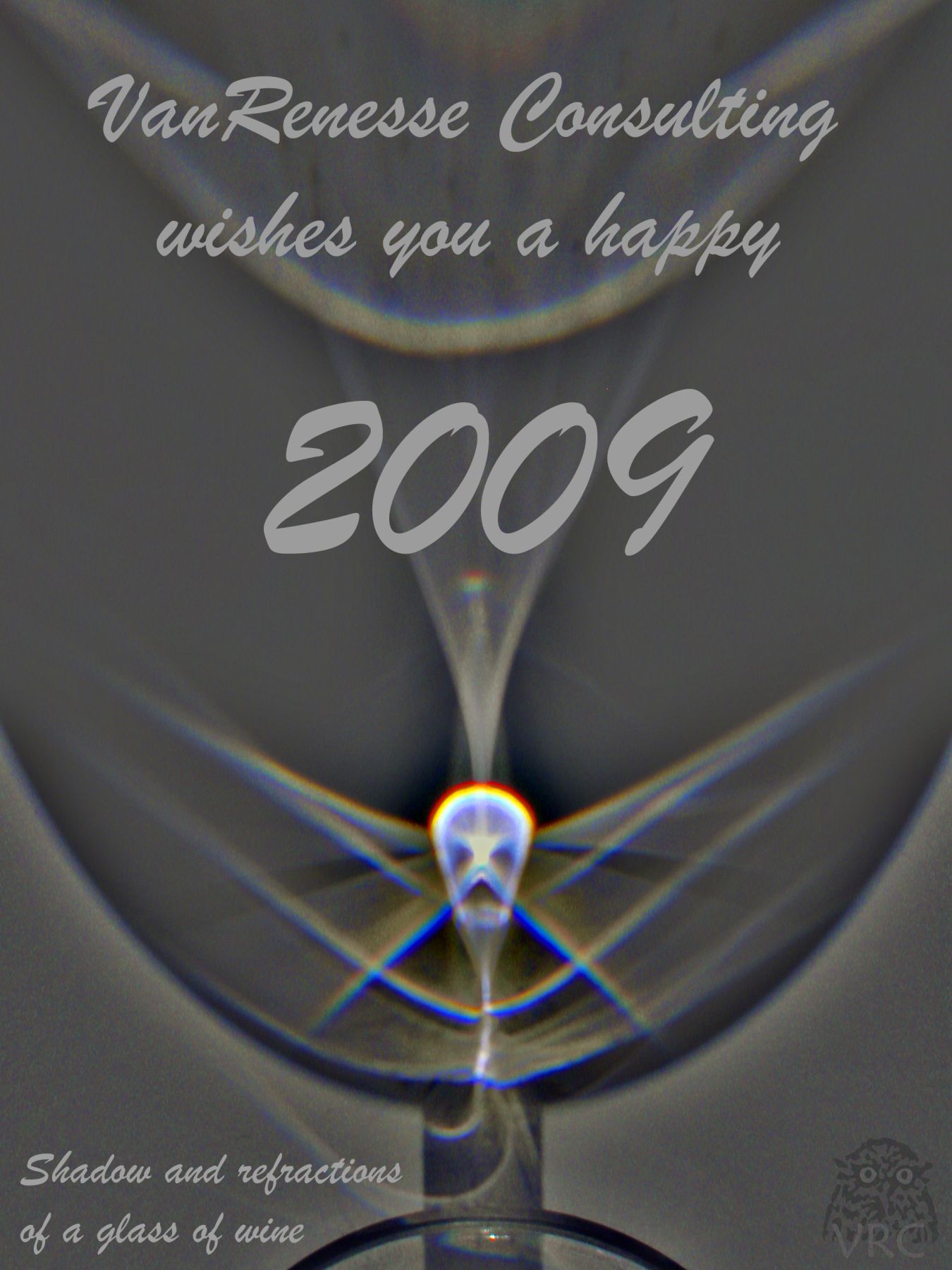 Happy and Successful 2009 to All

The photograph is made by illuminating a wine glass filled with water (not wine, I fibbed; wine would spoil the colors) with a white point source at about 60 degrees. The shadow cast by the filled wine glass on a white paper contains all sorts of interesting refractions. In fact, the glass acts as a primitive lens and projects a highly aberrated image (an abundance of spherical aberrations) of the point source within the shadow.
The contrast between the focus and the various refractions is enormous and it takes some PhotoShopping (combining different exposures and subsequent global image processing) to create a satisfactory image.
Most certainly adapts of UFOs, grain circles and related urban legends, will recognize an alien staring at you. 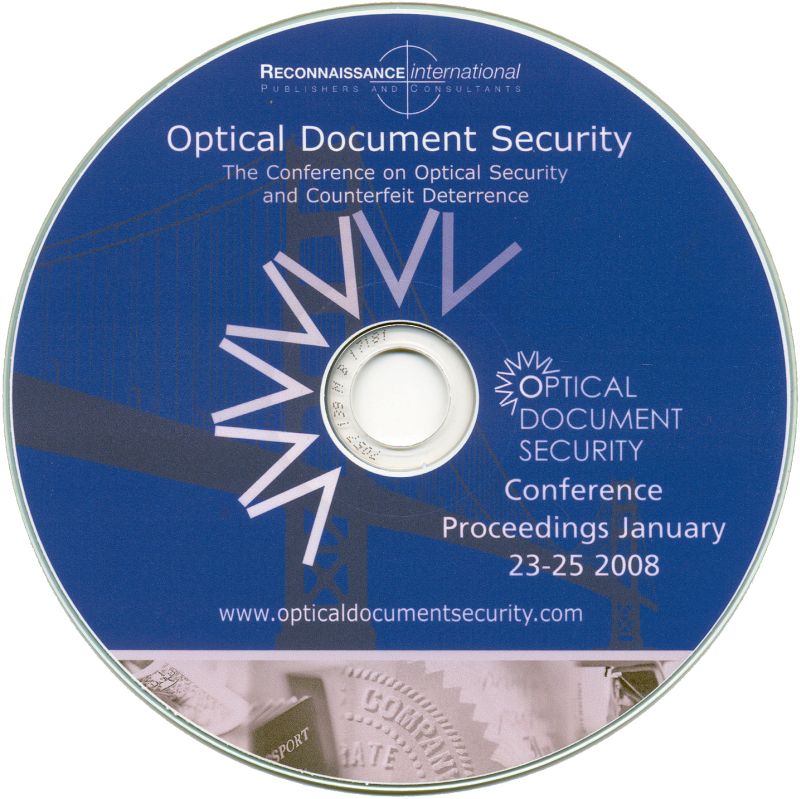 This conference is the follow-up to the biannual San Jose Conference on Optical Security and Counterfeit Deterrence Techniques. The conference was attended by 220 delegates from all over the world. For details see the: Conference website. 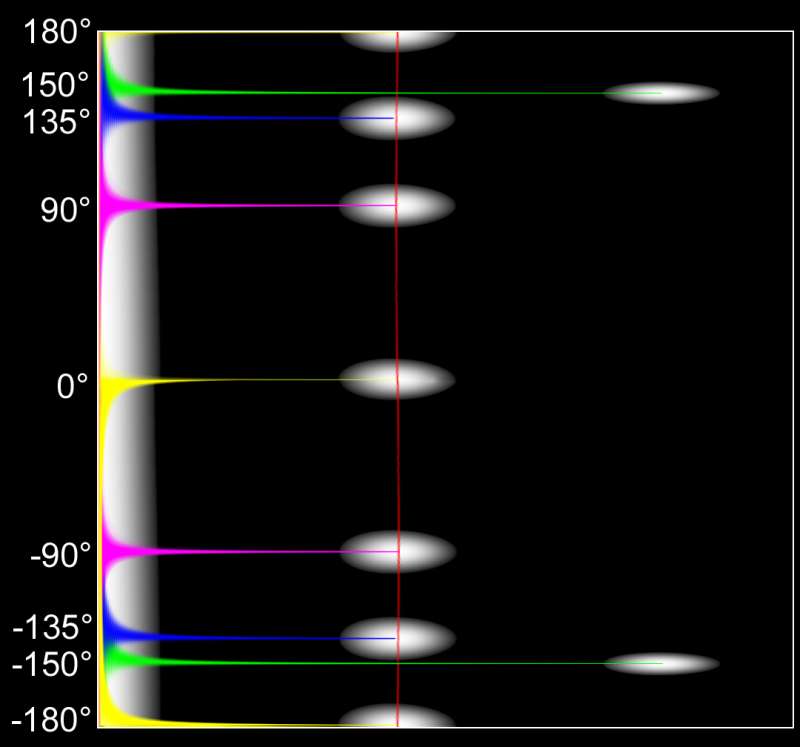 The VanRenesse Consulting lab will shortly be extended with a Universal Hologram Scanner (UHS), which forensic equipment is discussed in the paper "Testing the Universal Hologram Scanner."
The UHS analyzes diffractive optically variable image devices (DOVIDs) in the frequency domain, and outputs an orientation-frequency (OF) diagram, which diagram is a diffractive "fingerprint" of the DOVID. The OF diagram reveals characteristics of the equipment used by counterfeiters and could possibly become a standard to be exchanged between forensic laboratories as a concise description of DOVID characteristics. The UHS further allows analyzing and detailed comparison of DOVIDs in the spatial domain.
VanRenesse Consulting will carry out:
1. Fundamental UHS research on DOVIDs and their counterfeits to evaluate the UHS and make the results available for forensic institutions
2. Tests for members of the International Hologram Manufacturers Organization (IHMA)

On Februari 1, 2007 VanRenesse Consulting reached the respectable age of 5 years. And this is reason to briefly dwell on this encouraging fact. In these 5 years VanRenesse Consulting has been dealing with a broad spectrum of services to the field of document and product security. A brief overview of this spectrum is given on this website under Projects. A third edition of the book Optical Document Security has seen the light and the 5th and 6th Conferences on Optical Security and Counterfeit Deterrence Techniques were organized by VanRenesse Consulting in 2004 and 2006. The organization of the 2008 San Francisco Conference on Optical Document Security started early 2007.
I take the opportunity to thank everybody, customers and business relations alike for their support.

Of old the circle is a symbol of eternity while the colour circle symbolizes the eternal cycle of annual seasons. In the colour circle a light aura is embedded representing clear insight.
This was the theme of my 2007 seasonal greetings.

The central aura was photographed against a white point source through a transparency containing tens of thousands of randomly distributed tiny circles. The phenomenon is caused by light diffraction through monodisperse particle distributions and under certain weather conditions can be seen as the sun aura. For a discussion of this phenomenon see H.C. Bryant and N. Jarmie, "The Glory", Scientific American, July 1974. A display of the various phenomena of light auras appears in Natural and Artificial Auras